A landmark government ruling has approved plans for horizontal drilling for onshore shale gas to take place in the UK. The legal bill for the County Council has been reported in excess of £300,000 with councillors critical of the government decision to uphold the industry appeal, saying it over-ruled local democracy, having previously refused permission for extraction.

Trillions of cubic feet of shale gas are thought to be recoverable beneath parts of the UK and more than 200 onshore exploration licences have been awarded. What do councils need to have in place to meet this potential demand and how they can work with all stakeholders to endure the best decisions are reached for their communities? While local authorities need to adhere to central government’s decision to produce more energy in the UK their actions are being impatiently monitored by community groups and legal teams. The importance of planning permissions and outcomes has increased pressure that all considerations are fully investigated – whether it be environmentally, legally, economically or politically.

Supporters of onshore shale gas argue that industry activity will bring energy security, jobs and cash for the economy. Opponents fear fracking may cause earth tremors and pollution for mainly rural areas of the UK. How can all stakeholders be actively engaged from the start of an application process through to the practicalities of an active site? What can academics and community groups do to enhance the work that is taking place surrounding peripheral issues such as cleaning fracking water, noise pollution, traffic management and future legal disputes?

UK Onshore Oil and Gas: Policy, Planning and Future Developments has been designed to give help, guidance and support to the public sector to ensure delegates attending have the right and most accurate information on onshore oil and gas and environmental planning. The conference will be looking future projects that are due to commence in the next 12 months along with exploring how to minimise environmental impacts, such as the treatment of waste water from drilling operations, noise pollution and traffic management, to local communicates.

In May 2016 Third Energy won planning permission to test-drill a vertical well that had already been drilled at a site near Kirby Misperton in Ryedale. North Yorkshire County Council approved the application to extract shale gas, the first since a ban was lifted in 2012. Currently the approval decision is under judicial review. In October 2016 the UK government overturned local council objections and approved test horizontal hydraulic fracturing for shale gas in Lancashire. It is the biggest onshore drilling licence ever granted in the UK, covering over 680 square miles of the Bowland shale basin. Cuadrilla expects to begin hydraulic fracturing by the end of 2017. An application from energy firm iGas in north Nottinghamshire is awaiting planning permission for exploratory drilling, with councillors having deferred a decision on the application until 15 November 2016. Is the UK on the verge of a shale gas revolution or are local community fears and public opposition likely to derail planning decisions and halt the use of controversial technology to extract onshore gas?

A new UK shale gas industry has received support from the UK government not least because of the potential to transform the energy security of oil and gas supply in the UK, create new jobs and boost local economies. It is estimated that the testing phase of the Cuadrilla project for example will inject £20m into the local economy over the next 18 months. Offshore oil and gas extraction is in steep decline and UK gas demand is heavily dependent on Russia and Qatar. It has been calculated by the British Geological Survey that the UK could be sitting on one of the biggest gas reserves in Europe, with an estimated 1.33 trillion cubic feet of shale gas potential in central England alone. The scale reaches even further with more than 200 onshore exploration licences having been awarded to energy companies. Those in support believe shale gas is an invaluable ‘bridge fuel’ that can meet the UK’s heating and energy needs for decades as we move towards a low carbon future. Conventional onshore oil and gas production has been happening in the UK for 150 years with output continuing on 120 sites. However controversy around new drill wells and unconventional extraction commonly centres around the environmental and community impacts.

A four-year poll by YouGov for the University of Nottingham study found that support for fracking had fallen sharply in the last twelve months and is now at its lowest ever level. More people now oppose rather than support shale gas extraction, the survey finding that many people associate shale gas with higher greenhouse emissions and water contamination and not just concerns on impact on their immediate environment. A recent study in the Journal of Applied Ecology has found that two-thirds of areas have been labelled as suitable for shale gas extraction have levels of biodiversity equal or above the national average. Will the backing of a new fossil fuel development undermine plans to tackle global warming? How can local community concerns around health, methane emissions and water contamination be addressed?

UK Onshore Oil and Gas: Policy, Planning and Future Developments has been designed to give help, guidance and support to the public sector to ensure delegates attending have the right and most accurate information on onshore oil and gas and environmental planning. The conference will be looking future projects that are due to commence in the next 12 months along with exploring how to minimise environmental impacts, such as the treatment of waste water from drilling operations, noise pollution and traffic management, to local communicates.

"Welcome and introduction"
09:35
"A Social Licence to Frack?"

Both sides of the shale gas conflict in the UK have used the concept of the ‘Social Licence” without really explaining what is meant by it. This presentation explores the origins of the concept and it explains it key elements. It then considers the arguments for and against shale gas development in the UK. It concludes by considering the relationship between the political, actuarial (regulatory) and social licences to explain the current situation with Cuadrilla in Lancashire.

09:55
"A review of four years of fracking communications"

Ever since Balcombe in 2013, the onshore oil and gas industry has be forced to wage a war of attrition with opponents of so called “fracking”. What have we learned over the time? And what should we expect in the future?

"Expert Panel: Review of recent planning applications: What can be improved and what support can be given?"

What do councils need to have in place to meet demand in onshore oil and gas applications and how can they work with all stakeholders to endure the best decisions are reached for their communities? What actions can local authorities take to best evaluate the economical benefits alongside the environmental impacts?

Working with ‘humans’ – how can we do better?

"Working with ‘humans’ – how can we do better?"

Public consultation is arguably one of the most challenging part of the planning process. This is because it involves humans and humans are programmed to resist change. Pre-application consultation forms an important part of the planning process. However, as the growing body of case law demonstrates, it can also be the ‘soft underbelly’ of a planning application. Savvy objectors will always be looking for a ‘chink’ in the consultation process which they can exploit to launch a legal challenge.This presentation looks at the challenges that are faced by those trying to engage with the local community on oil and gas projects. Recognising that it will never be possible to please everyone, it explores various ways in which we can better manage the process, reduce the ‘noise level’ from objectors and protect ourselves against legal challenge.

An insight into how Halliburton approaches the reservoir characterisation of unconventional reservoirs, the workflows and solutions we use, and how this helps enhance decision-making and deliver an optimised field development plan

Peel Gas & Oil, part of the Peel Group, has an interest in facilitating shale gas development and being an integral part of the shale gas supply chain. The Peel Group is a major private investor in land and infrastructure primarily in the North of England. One of the core assets is the Manchester Ship Canal which is partially situated within PEDL 184 and 190. In conjunction with technical partners, Peel commissioned an industrial scale water trial to determine if abstracted, filtered and uv treated water from the Canal could produce water in a quantity and of a quality that was appropriate for industrial processes including hydraulic fracturing.
This presentation reviews the operation of the trial and describes headline water quality results and positive implications of using ‘industrial’ water in the emerging UK shale gas industry.

The presentation will explain the use of Arvia’s ODC system, a novel solution to make better use of the water we have and to reduce contamination. The system provides:
• Safe discharge of wastewater to the environment
• Enables water to be reused
• Preferentially removes contaminants of concern
• Meet regulatory targets for COD and micro-pollutants
Discussion regarding previous and ongoing case studies which document the ability of the ODC system in various applications and a brief explanation of the approach we take with our clients.

Exploring the strict regulations set by the UK government and processes for extracting hydrocarbons safely. A robust system has been developed to ensure such operations are to be carried out to the highest standards of safety and environmental protection – what standards need to be in place for licence holders, operators and councils to progress?

Coffee in the networking area

Following the majority House of Commons decision it is absolutely vital that the public, both nationally and locally, are onside with shale gas exploration. This means ensuring that there is a proper dialogue, the industry and politicians listen to their concerns, making sure the public has accurate information and that regulations are in place to ensure it is delivered safely. It is hugely important that it is the people and the politicians who are in charge of driving this forward. It should not be driven by the producers who inevitably have financial incentives. This means that they have to account for their actions at every step, keep people informed, and ensure that community benefits reach the people they are intended for. Robust regulation and planning is key. The APPG for Shale Gas Regulation and Planning has taken evidence from interested parties on both sides of the argument to make recommendations to government. The group’s report will be published later this year. Finally the presentation will cover the pressure on politicians who are supportive of Shale Gas.

"The Paris Agreement on Climate Change: Does shale gas extraction really have a role?”"

A four-year poll by YouGov for the University of Nottingham study found that support for fracking had fallen sharply in the last twelve months and is now at its lowest ever level. More people now oppose rather than support shale gas extraction, the survey finding that many people associate shale gas with higher greenhouse emissions and water contamination and not just concerns on impact on their immediate environment. Will the backing of a new fossil fuel development undermine plans to tackle global warming?

Which email address are we sending the offline booking form for UK Onshore Oil & Gas: Policy, Planning and Future Developments? 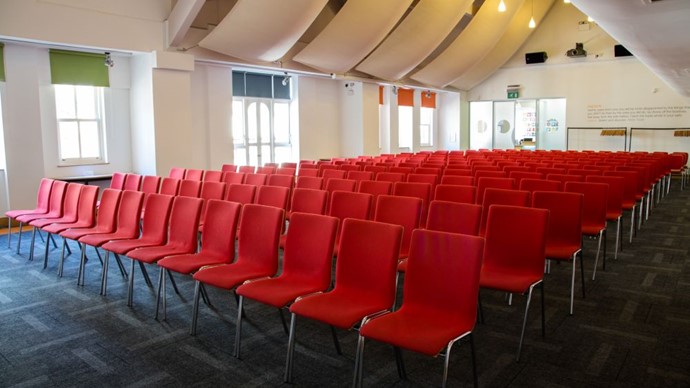 Situated at the heart of the city, just a hop, skip and jump away from all major transport links: thestudiobirmingham has much more than 19 vibrant spaces to offer. Complimented as a hidden gem, our bustling 2nd city venue boasts both a communal business lounge & roof garden. A perfect setting for like-minded professionals to get the job done or for that all important lunch time sun bathe.