From the Oxford English Dictionary [online version]:
Weekend (n.)
a. The period between two working weeks, typically regarded as a time for leisure or recreation.

Angry Tax Payer: I see that your lot have found yet another excuse to avoid increasing the number of doctors who have to work at weekends.
Militant Doctor: I presume that you are referring to the paper that I sent you by Metcalfe et al. which demonstrated that admission to an English Major Trauma Centre at a weekend is not associated with any increase in mortality.[1]
ATP: Yes, but only because these well-funded specialist units are staffed around the clock with consultants and have 24-hour access to appropriate investigations. A plethora of other studies from both the NHS and other healthcare systems around the world have shown that patients admitted to hospitals at weekends have higher mortality and worse outcomes.[1] This is true for most of the common emergency conditions and also for elective patients!
MD: Nobody is denying that the weekend changes the behaviour of the whole of society and that there is a consequent effect on health but it is certainly not clear that the lack of doctors - and also supporting staff - at weekends is the only, or even the main, cause of increased mortality in hospitals. It may be due to the case mix of the presenting patients, clinical coding or many other aspects of healthcare delivery.[2]
ATP: Well that’s not what the Secretary of State for Health, the Royal College of Nursing and the Royal College of Physicians think.[3,4] They regard better staffing at the weekend as essential for reducing the differential outcomes of patients throughout the week. And the Keogh Mortality Review – published as a response to the Francis Report - found that the treatment of emergency patients was especially poor at weekends and nights.[5]
MD: So you are choosing to ignore the findings of the High-Intensity Specialist-Led Acute Care study which found that there was no association between weekend-weekday differences in hospital specialist staffing and weekend-weekday differences in emergency admission mortality?[6]
ATP: Health care investigators often use mortality as the only arbiter of good care but there are many other issues for the patient whilst they are still alive! One of the major recommendations of the NHS Seven Day Forum was for the NHS to adopt ten evidence-based clinical standards by 2016/17 to end variations in the care of patients admitted to hospital over the weekend.[7]
MD: Don’t forget that many other healthcare staff outside of hospitals don’t work at weekends and this, too, must have an effect on outcomes.
ATP: Yes, we know that NHS111 directs twice as many people to emergency departments (EDs) at weekends as on weekdays because of a lack of other available healthcare facilities.[8] Also, good primary care has been shown to reduce ED attendances by patients of the pilot practices by nearly 10%! The impact was largest at weekends with a drop of 17.9% and there was a fall of 9.9% in weekend admissions of their patients from EDs. There was also a large reduction in ambulance use and hospital admissions amongst the elderly.[9]
MD: However, a similar evaluation in 2014 found that the cost savings from the 3.1% relative reduction in total ED visits was a fraction of the money spent providing the additional out-of-hours appointments in primary care.[10] And when general practitioners tried a pilot of working on Sundays, it failed because of a lack of both staff and patients![11] Moreover, a large survey of primary care patients demonstrated only lukewarm enthusiasm for weekend opening.[12] It seems that people do want urgent healthcare at weekends but not always of the type that they believe is available in primary care, especially on Sundays.
ATP: There is nothing special about Sundays. In countries with a six-day working week, the chosen day of rest was determined by the dominant culture's religious tradition: Friday (Muslim), Saturday (Jewish), and Sunday (Christian). However, numerous countries have adopted a two-day weekend over the past few decades - either Thursday and Friday, Friday and Saturday, or most commonly Saturday and Sunday.
MD: Yes, yes…I know the history of the weekend – at least in the USA. In 1908, the first five-day working week was introduced by a New England cotton mill so that their Jewish employees would not have to work on the Sabbath from sundown on Friday to sundown on Saturday. And in 1926, Henry Ford began shutting down his automotive factories for all of Saturday and Sunday without reducing his workers’ pay. Three years later, the Amalgamated Clothing Workers of America was the first union to demand a five-day workweek and actually to receive it. After that, the rest of the USA slowly followed.
ATP: However, it took legislation, not goodwill, to ensure a reasonable working week. It was not until 1940 (when the Fair Labor Standards Act of 1938 mandating a maximum 40-hour workweek went into effect) that the two-day weekend was adopted nationwide.
MD: Actually, the Oxford English Dictionary has references to weekend activities from as long ago as 1793! But, according to Google Ngram (which charts the incidence of words in digitised sources), the word “weekend” started to be used frequently towards the 1930s. By coincidence, I have the graph right here for you to see: (Figure 1): 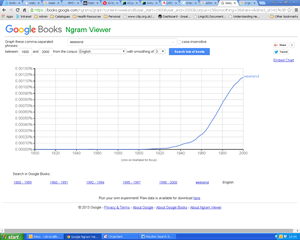 Figure 1: Google Books Ngram Viewer display of the frequency of the use of the word ’weekend’ in digitised English language sources between the years of 1800 and 2000.

ATP: The ethics of weekend healing is not a new problem either, you know. Jesus was criticised by the religious leaders of the day for curing the “woman bent double” on the Sabbath.[13]
MD: Yes, but even He didn’t advocate a complete disregard of the day of rest with normal work like any other day. Far from it!
ATP: So I assume that you are not hypocritical enough to go to a restaurant, a cinema, a bar, a club or an after-hours shop at weekends? Or to use a taxi, a bus or the new all-night London underground service on Saturdays or Sundays? Most shop workers have to work almost every weekend and bank holiday for a fraction of the wages of a junior doctor. And according to a survey in May 2015, by the life insurance company Met Life, almost half of all British people (47 per cent) said that they had to work to some extent over the weekend.[14]
MD: Most professions that are comparable to medicine don’t work at weekends throughout their working lives – lawyers, teachers and dentists for example.
ATP: Not set shifts perhaps, but they often have a lot of preparation work and reading to do and most of them have a working week well in excess of 40 hours. Anyway, surely anybody who was intelligent enough to get into a medical school must have realised that medicine was never going to be a nine to five job?
MD: Yes, but they anticipated working a proportion of weekends, not treating the weekend as two normal days. And unsocial working has to be paid for. Employees of the British Broadcasting Corporation (BBC) were paid more than £228 million to work during unsociable and unpredictable hours in 2014. The BBC recognised that it is impossible to broadcast around the clock without accruing these costs.[15] The NHS must surely soon come to the same conclusion.
ATP: But British doctors are amongst the best paid in Europe and locum costs in the NHS run into millions every year. Using a Labour Party “Freedom of Information” request, the Royal College of Emergency Medicine estimated the cost of medical locums in EDs since 2013 to be over £150 million a year!
MD: That’s true but there is now an enormous divide in the profession – more than ever before – between those specialties that work a lot of the time out-of-hours and those that almost never do.
ATP: Perhaps then, that is the solution. The workload of the weekend needs to be spread more equitably throughout the medical profession and in fact, all healthcare workers.
MD: You might be right. But I think that this debate is going to continue for a long while yet, both from the scientific and from ethical and social points of view.
ATP: At least we agree on something! Have a good weekend whatever you are doing!