"Homelessness is not inevitable. It is a political choice.“ Deborah Garvie, Policy Manager at Shelter

This statement from Garvie felt very resonant throughout the Addressing Homelessness: Reducing-Preventing-Ending conference. A key theme in many sessions was that we should blame policies, not the homeless themselves. Many of the speakers during the morning and midday sessions emphasised the problems of private sector tenancies and the lack of social housing as key problems. Whereas the afternoon talks were more about dealing with the consequences. Overall, Open Forum Events' first event on homelessness proved successful with a total of 14 speakers covering a range of evidence, causes and consequences.

The day's chair Mark McPherson, Director of Strategy, Partnership and Innovation at Homeless Link, facilitated speakers brilliantly and set the tone for the day in his opening address where he talked about the importance of context in the rise of homelessness over the last decade. Keynote speaker, Clive Betts MP, Chair of Communities and Local Government Select Communities, gave an insightful outline to his experience in Parliament around homelessness issues. He remained critical of the Conservative government ("they are living in a bubble - doing anything to save money, they don't care enough about people") while praising the recent National Audit Office report for linking welfare reforms to the increase in homelessness. He was not hopeful about the recent Homelessness Reduction Act and argued more money needs to be spent on affordable housing. 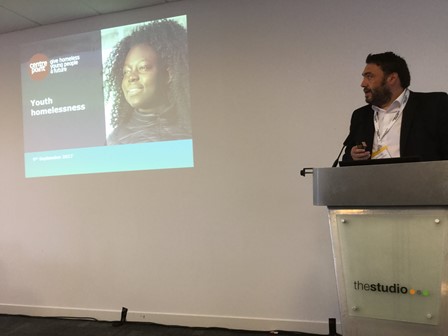 Other speakers went into more specifics about the issues and scale of the problem, including statistical evidence and examples from their work. Many highlighted structural problems, including poverty, unemployment, overcrowding, substance abuse and parental/peer conflict. Professor of Housing and Social Policy at Heriot-Watt University, Suzanne Fitzpatrick, found that people who experience child poverty have a much higher chance of becoming homeless later in life.

Fitzpatrick and later speaker Deborah Garvie both drew attention to an alarming graph showing the main cause of homelessness to be the ending of Assured Shorthold Tenancies (ASTs) over more traditional causes like social relationship breakdown or addiction problems. Homelessness has continuously fallen from the late 1980s, when it was last very high, but started rising again in 2009/2010.

Regarding young people's homelessness rates, people aged 18-21 cannot claim Universal Credit under new rules and are expected to live with parental figures. However, as Martin Gill, Director of Housing and Support at Centrepoint, pointed out, their family is often the cause for young people wanting to leave home in the first place.

Bigger picture problems were addressed by Fay Selvan, Chief Executive of Big Issue North. These included unprecedented population movement, supply not keeping up with demand and private housing being provided more than social housing for the first time in history. She spoke about what she had learnt in her time at the Big Issue North and The Harvey Project and the importance of having the will power to prevent homelessness.

"The rise of homelessness should be no surprise to us. What's been happening in the last few years means it is the perfect storm." Fay Selvan, Chief Executive of Big Issue North

Like Selvan, Amanda Croome and Jo Wilson, CEO and volunteer at local charity the Booth Centre respectively, focused more on taking action. They are involved in the pioneering Manchester Homelessness Charter, which comprises people with experiences of being homeless on its Board. Through this, night shelters have been set up in Manchester for the first time and Manchester City Council will be employing 13 people who have been homeless.

Garvie emphasised the freezing of Local Housing Allowance from 2016 to 2020 in preventing people obtaining homes. However, unlike Garvie and Fitzpatrick, Chris O'Leary (Director of Policy Evaluation and Research Unit and Manchester Metropolitan University) argued that issues around ASTs were not in and of themselves the cause of homelessness but rather certain groups were more at risk than others. He also raised the point that not only has the population grown hugely in the last few decades, but the average household size has shrunk and we have higher standards for more personal space. In other words, we are using space in homes less efficiently. As people are living longer and usually staying in their homes, 80% of households have at least one room that isn't occupied when it could be. 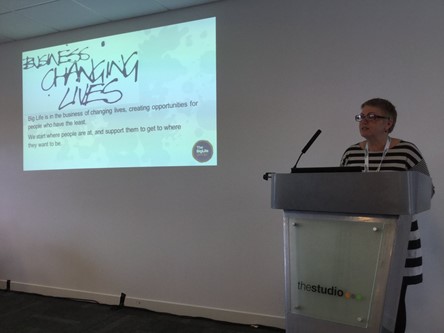 Practical policy issues were directly addressed in the first afternoon talk by Councillor Beth Knowles and Ivan Lewis MP. "Soft power isn't weak power," Knowles said regarding the fact the GM mayor has no statutory power. Lewis echoed this, further emphasising the huge opportunities having a mayor brings the region. They both spoke of bureaucratic issues around governance and the importance of not forgetting that every person without a home has their own story and challenges.

David Parker-Radford, Homeless Health Programme Manager at The Queen's Nursing Institute and Laura Dodge, Marketing and Communications Manager at Streetwise Opera, drew attention to improving homeless people's well-being. The former spoke of the vast inequalities in healthcare and the need to treat people holistically. The latter noted that being able to participate in the arts is in the UN Declaration of Human Rights, making it clear how fundamental it is to people's development.

"We often say that modern slavery is a hidden crime.“ Tatiana Gren-Jardan, Victim Support and Partnerships Adviser, Office of the Independent Anti-Slavery Commissioner

A case study analysis of Anglesey was given by the Head of Housing Services at the Isle of Anglesey County Council, Shan Lloyd-Williams. Though cuts have not been as severe in Wales compared to England, there has been an average of 8 people a day entering their offices with homelessness issues, which is proportionally high for a population of less than 70,000. Ending the day was Tatiana Gren-Jardan's talk on modern slavery. She highlighted the need to work internationally to effectively tackle the problem and the reasons victims often don't come forward.

After a packed day of several expert speakers, delegates gained much more insight into the many issues around homelessness including policy causes, knock-on effects and the importance of wellbeing. Everyone in attendance was engaged with, challenged by and free to discuss one of the country's most pressing issues.