Open Forum Events held our fourth conference on the topic of Safeguarding Children at Manchester’s superb venue The Bridgewater Hall. With a first-class speaker programme and a full delegate room, the day promised and delivered inspiring and outstanding presentations.

Opening keynote speaker Nazir Afzal OBE arguably stole the show. His 20-minute slot was jam-packed with opinions and anecdotes from his experience as a former chief prosecutor including his criticism of overly-bureaucratic social work and praise for the BBC commissioning the Three Girls drama. He remarked that the Rochdale case changed the landscape of how we deal with child sexual exploitation. 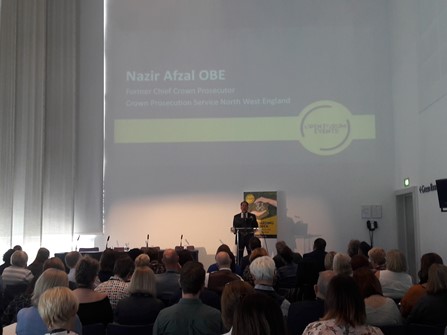 Though even in the most serious moments of his speech he managed to make light of things. During the Rochdale trial, he was incessantly harassed by the far-right. This included receiving 17,000 emails in one month calling for him to be deported, to which he joked “I’m from Birmingham, I don’t want to go back there.” He puts the causes of the Rochdale, Rotherham and Stuart Hall cases, as well as the Manchester Arena bombing, down to ‘male power and misogyny’.

Following Afzal was no easy job but Sir Alan Wood CBE rose to the challenge. He spoke very clearly and eloquently about what the Wood Review of 2016 had changed and its impact on the wider safeguarding picture. Rounding off the morning speakers were former footballers and abuse survivor David White and Paul Stewart who now represent SAVE Association. They told delegates of how their coach Barry Bennell groomed them, their struggle to keep the abuse to themselves for decades and what led them to set up SAVE Association.

“I was left with no one to turn to.” – David White, former footballer and SAVE Association representative.

After the morning break, the focus of the agenda shifted to other issues. This included Internet safety with Sangeet Bhullar, Founder and Executive Director of WISE KIDS. The charity often works directly with children and uses the analogy of the Internet being like a global city – “cities are exciting but parents wouldn’t leave their children alone in it.” Peter Richards of the NSPCC spoke about the new Scale-Up Unit and its aim to put more research into practice. 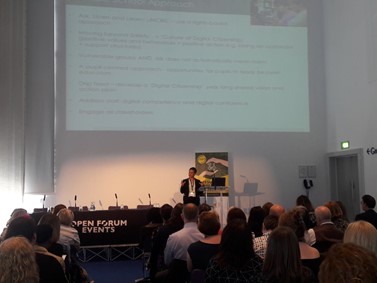 Keri O’Riordan, Professional Officer at the British Association of Social Workers (BASW) addressed the new 80/20 Campaign to get social workers spending more time working with children that doing bureaucratic tasks at their desks. Her first-hand experience of being a social worker made it very engaging and at times entertaining (she once referred to a dreaded “spreadsheet of shame”). Justine Skeats of IICSA (Independent Inquiry into Child Sexual Abuse), the event’s only sponsor, touched on a few different topics. This included the need for cultural and attitudal shifts to prevent CSE and the organisation’s Interim Report recommendations and Truth Project.

Delegates then reflected on the many topics covered so far over a lunch break. Following this, Jane Booth, Chair of Rochdale Borough Safeguarding Children’s Board gave a brilliant comprehensive outline of the Board’s work. She mentioned the unfair amount of negative press coverage Rochdale has received and the many achievements of the borough, particularly their work in tackling modern slavery.

“We can’t change the past but it’s very important that we learn from it.” – Jane Booth, Chair of Rochdale Borough Safeguarding Children’s Board.

Wendy Ghaffar HMI, Specialist Adviser of Cross-remit Safeguarding, Ofsted gave credit to the voluntary sector for their key role in multi-agency partnerships in safeguarding children. By mid-afternoon, Kamena Dorling who chairs the Refugee Children’s Consortium gave a particularly insightful presentation on the issues of refugee and asylum seeking children, half of which arrive unaccompanied and often without documentation, only to be faced with the UK’s hostile immigration policy. Britain has less than 3% of all asylum seekers in the EU.

Closing the day were David Graham, National Director of the Care Leaver's Association and Phil Raws, Senior Researcher at The Children's Society. Graham's informative address focused on the health issues the care leavers experience, whilst Raws explored the often overlooked issues of adolescent neglect. Both were important topics to close on.

Throughout all of this, Renuka Jeyarajah-Dent, Director of Operations and Deputy CEO of Coram, superbly chaired the conference. She often added insightful points between speakers and made perceptive connections between different presentations which clearly highlighted particular themes to delegates. The audience was left with much to think about and reflect on how best to improve safeguarding.