Never has the profile of Mental Health been so high. In 2016, the government published its Five-Year Forward View, which included a promise to fund mental health services by an extra £1bn per year by 2020/21. The Minister for Loneliness role was created by the Prime Minister in January 2018. In May 2018, the government announced NHS perinatal mental health care would be rolled out across the UK.

There are several factors in achieving an overall improvement in the general population’s mental health. These range from early intervention and parity of esteem to improving integration and whole-person approaches. All institutions involved in improving mental health need to work together effectively. These include the NHS, social services, housing, education and the criminal justice system.

Our next event in our series of mental health conferences, Meeting Mental Health Needs: Practical Interventions to Improve Solutions, has an exceptional line-up of speakers and will be another excellent opportunity

There has been some significant progress in some areas of mental health. The Minister for Loneliness role was created by the Prime Minister in January 2018 in response to loneliness and isolation becoming more widespread in UK society. In May 2018, the government announced NHS perinatal mental health care would be rolled out across the UK. But despite steps like these, there is still a long way to go to bettering each aspect of mental health. It is a very big picture that needs a lot of magnifying down onto the many specifics to see an overall improvement.

There are several factors in achieving an overall improvement in the general population’s mental health. These range from early intervention and parity of esteem to improving integration and whole-person approaches. It is not only healthcare that should hold responsibility for improving people’s mental health. Other institutions play a pivotal part such as social services, housing, education and the criminal justice system. This is sometimes missing in the mental health picture. All corners of society should be putting enough time and effort into considering the mental health of the people with whom it comes into contact. At this event, you will gain improved understanding of the myriad of factors and issues surrounding mental health.

Children, young people and students’ mental health care is a particularly pressing concern as it is a key stage for early intervention to prevent issues developing later in life. A recent NSPCC report showed that in 2017-18, almost 19,000 children aged under 11 were referred for specialist mental health support. With regards to students; greater academic and social pressures, a lack of personalised pastoral care and growing financial burden mean that mental health issues in higher education is on the rise. Suicide rates amongst students have hit record levels in recent years. Students can also face up to four months waiting times to see a counsellor about their issues.

Numerous reports by governmental and non-governmental bodies have focused on the myriad aspects of mental health such as quality of care, different age groups, funding and more. Many of these highlight the importance of user-led service design. This includes the Care Quality Commission’s ‘The state of care in mental health services 2014 to 2017’ published in April 2018. It stated “The one area where mental health staff could do better as caring professionals is by engaging patients as true partners in their care. […] In too many services, care plans do not truly reflect the patient’s voice.” The report also identified five main areas of concern which included concerns about staffing shortages, ‘locked rehabilitation wards’ and the use of restrictive practices and physical restraint to deescalate challenging behaviour.

There are further problems at providing adequate mental health support within certain institutions such as higher education, as previously mentioned, and within workplaces. The Thriving at Work report (October 2017) commissioned by the Prime Minister found that 300,000 people a year are leaving their jobs due to long-term mental health issues. Moreover, in May 2018 a poll of 700 managers by the Institute of Directors found that 40% had been approached by staff with concerns around mental health and the failure to offer appropriate training. This is an increase of 12% from the previous year.

The issues of inequalities within the system continue to prevail. This can include people with mental health issues not receiving adequate care for their physical health issues, as well as people from more disadvantaged socioeconomic backgrounds less likely to receive the care and treatment they need. Many services users have taken power into their own hands and used creative methods such as blogging, vlogging and podcasting to share their stories and find others to relate to, thereby aiding mental health.

Registration in the Networking Area

As Chief Justice of the Civil and Trading Court and a distinguished member of Afghanistan's Supreme Court, Marzia set-up the Afghan Women Social and Cultural Organisation (AWSCO) in 1994 to provide assistance and emergency relief to refugees, primarily women and children in Afghanistan and Pakistan; in addition to supporting the development of healthcare, education, agricultural and construction projects in the central and northern regions of Afghanistan.

Marzia's work for AWSCO drew the attention of terrorist organisations operating in the region and in 2008, she came to the UK as a refugee, following a hit-and-run attempt on her life by the Taliban that left her hospitalised for six months.

Marzia will speak to delegates about how access to mental health services in the UK radically changed the direction of her life - providing support that she would have been unable to access in Afghanistan; helping her to re-enter education, study English language and UK law - in addition to working part-time in her local MP, Debbie Abrahams' constituency office.

Whilst the Five Year Forward View promises to fund mental health services by an extra £1 billion per year, the NHs and other bodies continue to struggle to provide for rising demand.

"Why Early Intervention is a Crucial Requirement"

As professionals on the front-line providing services in mental health to millions already in need, how do we ensure that we are able to manage the Governments increasing pressure being placed upon us.  The NHS and other services currently do not have the capacity to effectively assist everyone who has been identified as needing support, and many people with mild to moderate needs are therefore not being seen.

With 50% of mental health problems established by age 14 and 75% by age 24. Drawing and Talking LTD, one of the UK’s leading early intervention training companies, discusses the ever growing need to identify effective early interventions that can support those suffering, in order to reduce the impact and pressure being placed on NHS and specialists to meet targets set out in the Green Paper.

Centre for Mental Health, Kaleidoscope and Rethink Mental Illness are working together with support from the Royal College of GPs and the Royal College of Psychiatrists to create an Equally Well collaborative in the UK. The idea was initiated in New Zealand and will bring together health and care providers, commissioners, professional bodies, service user and carer organisations, charities and many more. They will work nationally or locally, to form a collaborative in the UK to bring about equal physical health for people with a mental illness.

Personalised healthcare is a key area of focus for the NHS, just as it is for health systems across the globe. However to date it has focused on physical health, the concept of personalising mental health care hasn’t been considered. This session will discuss how new delivery methods for high quality, evidence based mental health care provision can be leveraged to begin to personalise mental care thus delivering better outcomes.

Facing greater academic and social pressures, a lack of personalised pastoral care and growing financial burden, mental health issues amongst students is on the rise. Until 2009-10, the rate of male and female students reporting mental health issues was about 0.5%. By 2015, however, it had risen to 2.5% of female students and 1.4% of male students. Suicide rates amongst students have hit record levels in recent years. Students can also face up to four months waiting times to see a counsellor about their issues. This will address what can be done to solve the issues.

In this keynote address we will learn about the pivotal role that co-creation with parents and professionals has played in the development and deployment of the free NHS accredited Baby Buddy app. Baby Buddy has been created by the national charity Best Beginnings in collaboration with many organisations including RCPsych to inform and empower parents, through pregnancy and the early months, to support maternal mental health, to augment service delivery and to reduce inequalities. Data on uptake, usage and feedback and independent evaluation findings will be shared along with short films featuring parent sharing some of their mental health experiences.

15:00
"Workplace mental health: How much progress has been made?"

Recent studies and reports have shown that stress, anxiety and other mental health issues are increasingly being put down to people’s working lives. A poll of 700 managers by the Institute of Directors found four in 10 had been approached by staff with concerns around mental health. The Thriving for Work report also shows that 300,000 people a year are leaving their jobs due to longer-term mental health issues. There needs to be a greater effort to ensure employees are comfortable in their jobs and prevented from being over-worked.

At the University of Manchester we've been using a new software system which identifies students who might be struggling with their mental health by triangulating their engagement and other data. The idea being that student support officers and other responsible staff can then follow up with these students quickly and before matters escalate for them.

In a 2-year trial it's had a profound effect on our student support. Using it we've uncovered several serious welfare cases that would have gone unnoticed and worsened, and using it we're now able to support students almost as soon as problems start to manifest themselves.

In this talk I will describe StudentCRT, the advantages it brings to student support and how I think similar systems could revolutionise mental health provision across multiple sectors.

15:40
"Quality of care in our mental health services"

In April 2018, the Care Quality Commission published a report on ‘The state of mental health care 2014-2017’. This identified five main areas of concern which included concerns about ‘locked rehabilitation wards’, staffing shortages and the use of restrictive practices and physical restraint to deescalate challenging behaviour. The report also highlighted the importance of user-led service design as well as focusing in on case study examples.

Which email address are we sending the offline booking form for Meeting Mental Health Needs: Practical Interventions to Improve Services? 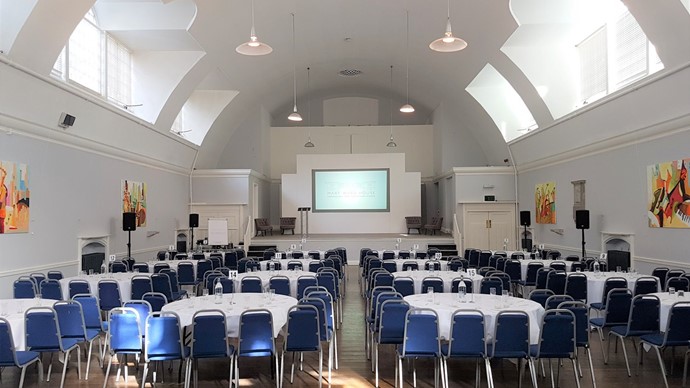 In 2002 the building was placed on the Listed Buildings at Risk Register with the Mary Ward House trust having failed to secure lottery funding.

The building has been painstakingly renovated to ensure that this extremely important part of National Heritage continues to serve as a place of learning, knowledge dissemination and promotion of equality.

This objective directly enables us in; the advancement of the arts, culture, heritage and science; the relief of those in need by reason of youth, age, ill-health, disability, financial hardship or other disadvantage; the advancement of citizenship or community development

·         Health and Wellbeing Boards and Managers