The Learning Disabilities and Autism: Improving Care conference will be no exception in continuing to drive the agenda to improve lives.

There has been some significant activity and new developments in recent months and this conference, with the insightful contributions from the expert speakers, will provide delegates with updates on:

As we enter 2020 join us at the Learning Disabilities and Autism: Improving Care conference  with the hope that by the end of the decade, if not sooner, inequalities will be a thing of the past for people with learning disability and/or autism.

In May 2019, NHS England announced an extra £5 million of funding specifically to care for people with a learning disability. The prime concerns include the scale of premature deaths of people with learning disabilities and/or autism, based on the latest data that has revealed that individuals are dying 25 years earlier than the general population. The NHS is committed to carrying out reviews improve care and take action nationally to tackle serious conditions.
To further enhance care and treatment, the Department of Health and Social Care has undergone a consultation focusing on specialist training for health and care professionals to better understand the needs of people and make the necessary adjustments to support them.

A report by the Children’s Commissioner has revealed harrowing evidence of children, particularly those who are autistic or have a learning disability, being unnecessarily admitted to secure hospitals, some spending prolonged periods in these institutions, often a long way from home, family and friends. Some of the practices these children are subjected to are significantly disturbing with the report describing the use of restraint and seclusion. The Commissioner described these children as "some of the most vulnerable children of all, with very complex needs, growing up in institutions usually far away from their family home. For many of them this is a frightening and overwhelming experience. For many of their families it is a nightmare."
In another hospital report, undertaken by the CQC, it warns that patients with learning disabilities and autism are being let down by a ‘broken’. Prolonged segregation, wards unsuitable for autistic patients and a lack of training of staff were just some of the issues highlighted.

Within the community there are also situations that need to be overcome which include discrimination, prejudice and hate crime. The charity United Response has launched a campaign ‘Am I Your Problem’ to challenge the general public to consider the harm they may be inflicting on people with learning disabilities and autism through their actions and behaviour.
Prejudicial attitudes can also be a factor in social withdrawal, leading to feelings of loneliness and isolation. One scheme to try and combat this is fronted by Ambitions about Autism. Young people form the charity have launched a new resource to help other young autistic people to access youth groups and after school activities.

Other positive action to improve people’s situations is the continuing STOMP programme dedicated to reducing the use of psychotic medication to treat challenging behaviour. The use of technology is also a force for good and can support people to access the care they need, remain as independent as possible and help connect to social networks.

There is plethora of pioneering work being done and significantly a great deal is being undertaken by those who have a learning disability and /or autism themselves and therefore have the best understanding of what is required to make improvements.

This conference is the next installment, in a series of highly insightful events, focusing on improving care, support and life chances for all those living with or affected by learning disabilities and/or autism.

Prevention and early intervention in developing positive support that helps people to have a good life.

Susan who is 67 years old has just had a major knee operation. The whole system of aftercare failed her from, ward staff, district nurses, GP’s, Physios and even the crisis team ORCAT. She and her sister where left alone to cope with the situation at home.

10:10
"Overcoming Workforce Challenges in Services for People with Learning Disabilities and Autism"

Learning Disability and Autism services are a rising priority because of the national all age autism strategy and the NHS Long Term Plan. Developing a workforce that is fit for purpose and supporting people through their pathway of care remains a significant challenge. Some initiatives to address this are presented

10:30
"Providing the Best Care, with the Appropriate Support, in the Right Place"

2 recently published reports have revealed shocking evidence of the treatment received by people in hospitals. The Children’s Commissioner review states that many vulnerable children with learning disabilities are stuck in mental health hospitals for too long in poor conditions. The CQC report, examining the segregation of children on mental health wards and that of adults with a learning disability or autism in hospitals has labelled the system ‘not fit for purpose’.

Families of children and young people who are admitted to hospitals far away from their homes and for long periods of time often say ‘it all started in education’
Natalie will talk about MacIntyre’s inclusive, solution focussed education model and the positive impact it has had on young people’s lives.

Jo will be co presenting with a person with a learning disability who will share their experiences.

United Response’s ‘Am I Your Problem?’ campaign challenges the hidden indifference, discrimination and sometimes outright hostility towards people with learning disabilities or autism. The charity asked more than 150 people it supported about their experiences within different social settings. The widespread hostility and prejudice they face is often not acknowledged, recognised or reported as a hate crime.

12:25
"Hft’s Sector Pulse Check: How are social care providers currently using technology, and what is stopping them from doing more?"

A key theme of Hft’s 2019/20 Sector Pulse Check report was the use of Assistive Technologies.

In this presentation, we will discuss the results of the survey. We will highlight how the sector is currently using assistive technologies, what the current barriers are to increased usage, and the positive benefits that assistive technologies can bring in terms of more meaningful support for those who need it.

"The Expert by Experience (EBE) Programme "

Dawn and Stefan will provide an overview of the Expert by Experience (EBE) programme the team has developed across the Eden Futures group. EBE enables interested service users to work alongside members of the quality team and visit services to speak with staff and service users about how the service meets people’s needs. This information then feeds into audits in respect of those services. Stefan is one of the founding members of the programme. He’ll give his perspective on the importance of providing service users with a voice for change and improvement. He’ll also highlight what his life was like before he came to Eden Futures and what it’s like now in contrast.

A hot, two-course lunch consisting of multiple options will be provided for delegates. We cater for all dietary requirements, including vegetarian, vegan and gluten/dairy-free; just notify us ahead of time should you have any allergens or requirements.

"The Digital Transformation of LD and Autism Services"

Digital technology has the potential to dramatically improve user outcomes and deliver financial sustainability to support providers over the next 10 years.

Financial sustainability is one of the biggest challenges facing support services in UK health and social care sector today.

Technologies such as SBRI award winner Brain in Hand have the power to answer the sustainability question – not just by changing the delivery method of services, but most importantly by improving service user outcomes with personalised support.

STOMP is a national project for stopping over medication of people with a learning disability, autism or both with psychotropic medicines. It involves many different organisations which are helping to stop the overuse of these medicines and support people to stay well and have a good quality of life.

15:20
"Include Autism – Making Youth Groups Accessible to all Young People"

Youth groups and extra-curricular activities are a very important part of young people's lives - helping them make new friends, grow in confidence and develop new skills. Yet sadly we know many young autistic people find it hard to attend youth groups due to misunderstanding of autism and problems with accessibility. To tackle this problem, Ambitious about Autism's Youth Patrons have created Include Autism - the toolkit for developing autism inclusive youth groups.

"Celebrating the Achievements of Pioneering Work and Influence"

Recognising the commitment of individuals with learning disabilities and /or autism who are working to transform the lives of people across the UK by creating a more accessible and inclusive world.

Which email address are we sending the offline booking form for Learning Disabilities & Autism 2020 Manchester? 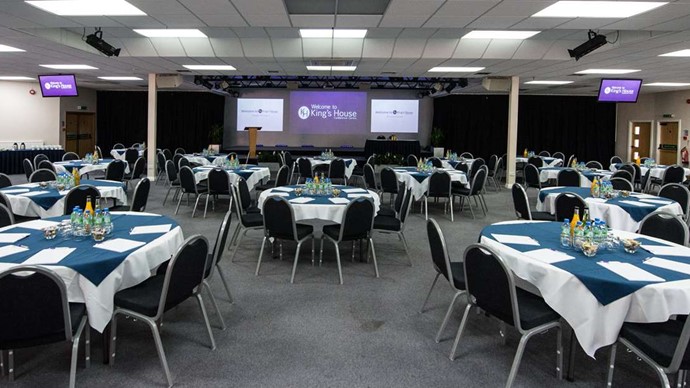 King’s House Conference Centre is a versatile venue perfect for a wide range of conferencing requirements.